IS DOC UP TO THE TASK?

Below this post you will find the current rules of Owlman. At the end of 2010 a change in the rules was made. This was because we discovered a winning strategy for Doc under the original rules. Although my hunch had been that the new ruling might tip the balance in favour of Owlman, this has not yet  been demonstrated on Super Duper Games. Of the last ten games played there, five were won by Doc; five by Owlman.

The basic issue relevant to this rule change is that of repetition of position. This issue, of course, has an impact on many games, Chess and Go, included. Many games (such as Chess) have no problem surviving the rulings necessary. Other games (such as Go) may even be enhanced by these rulings. Nevertheless many modern games, if they are to be played at a high standard of proficiency, are designed so that repetition is avoided altogether.

It has been said many times that if Chess were a newly invented games, no-one would put up with such a demanding set of rules. However, I am not so sure the repetition rule itself is really such a bugbear. After all, if you are playing at a high level, this is the least of your worries. And if you're playing casually, and are in a loop, you would either vary yourself, or offer your opponent a draw. (If he was perverse enough to refuse the draw- but still not vary- then you might do better finding another opponent.)

In Owlman itself,  positions often occur  where Owlman's best move is to attack a particular helper, whereupon  Doc's best option is to move it, whereupon Owlman's best move is to attack it again- and then Doc does best  to move it back where it started! The result of this equilibrium, without any ruling,  would- if neither player wanted to risk a sub optimal move- be a never ending (drawn)  game. This is a problem in Owlman because it happens quite frequently. Formerly it was effectively Owlman who was forced to play sub optimal moves when this occurred- as  Doc could demand that he DIDN'T repeat a position. As explained below, however,  it became clear that this enabled Doc to achieve a long drawn out, and rather boring, win.

The new rules favour Owlman instead. Now there is no rule which prevents repetition, merely a requirement that Doc win before 'nightfall (ie on his 49th move or earlier). The effect is to force Doc to avoid repetition, which means that HE will have to play sub standard moves sometimes (sub standard that is compared  to the proscribed repetition). While this does not seem to allow Owlman to win by use of  a clear cut  strategy, such as can be boiled down to a few principles, nevertheless, it does make the  game very challenging for Doc. If Owlman plays with any verve, Doc's helpers will have run screaming from the woods in next to no time!! Doc, I think, needs to figure out a puzzle- like strategy to inch forward while keeping a sufficient number of advancing helpers on board.

Tricky, but difficult! On the other hand, Doc is still winning games. Either I'm wrong or Owlman isn't swooping as freely (and frighteningly) as he should!
Posted by Andrew Perkis at 2:42 PM 6 comments:

Current Rules for play on SDG

(See Previous Posts for Details re Sightings of the Owlman etc)

RULES, EQUIPMENT, AND  SETUP
The game can be played using pieces from a chess and checkers set. The dark squares on the board represent the trees of Mawnan wood; pieces move between the trees on the light squares. The setup for play is shown in Fig.1. Doc is represented by the white chess king, and  his helpers are the 12 white checkers. A black knight represents Owlman (although this can be replaced by a suitably sized ornamental owl with a felt base if one is available).
At the start of play, Doc surveys the woods from h1 (the church tower). Owlman is about to advance through the woods from a8 (his secret lair). Owlman's main objectiveis to frighten all of Doc's helpers out of the woods. Doc aims to reach the Owlman's lair, along with one of his helpers, who will help him set up his "cryptozoological"  camera. (See  "End of Game" for details of other winning objectives.)
PLAYWhite moves first. Thereafter moves alternate with no passing. All pieces (both White and Black) may make a 'step' move to any adjoining white square- the move of a King in Checkers.  Owlman (unlike Doc or his helpers) may instead make a 'swoop' move from corner to opposite corner of a 4x2 rectangle- a kind of elongated knight move. (The 'Fairy Chess' piece with this move is usually called a Camel.) Owlman may jump over other pieces while making a swoop.
The squares marked with an 'X' in Figure 2 are those to which Owlman can move by swoop. Owlman can also make a 'super swoop'. This is dealt with under 'captures'  below.
There is no white square to which a piece may not move- with the exception of h1. Owlman may play onto this square, but, after the square has been vacated by Doc, it may not be played onto by White again.


CAPTURES
Only Owlman can make captures. The one case where Owlman may capture Doc is if  Doc still occupies h1 when Owlman moves onto that square, either by normal move or by swoop move. Otherwise, Owlman can only capture helpers, and can only do so with a step move, not a swoop move.  Whenever Owlman advances by making a step move towards a helper, he instills such terror that the poor helper immediately runs out of the woods and plays no further part in the game. Figure 2 clarifies these captures. Here Owlman can advance to d5 and capture f3, or to d7 and capture e8. The helper on b5, however, cannot be captured.
One other method of capture is possible for Owlman, and that is by super swoop. A super swoop may only be made when Owlman is placed on h1 (the church tower). From here he may super swoop to any square occupied by a helper. The helper is then captured and removed from the board. From h1 Owlman must make a super swoop move; other move types from the church tower are not permitted.

END OF GAME
The game ends as a win for White if Doc reaches a8 and has also moved a helper to b7. Doc also wins (though this happens but rarely) if a trapped Owlman is unable to move on his turn of play. Owlman wins if he either captures Doc or all of Doc's helpers. IF DOC HAS NOT ACHIEVED HIS OBJECTIVE  BY NIGHTFALL (IE AFTER HIS 49TH MOVE) THEN OWLMAN IS THE WINNER.

Posted by Andrew Perkis at 3:56 PM No comments:

This will come into effect on SDG on 20th Dec. 2010. Under this rule Doc loses if he has not achieved his objective by his 49th move. There are now no rules concerning repetition.

Under the the old rules Doc, it seems had a very long forced win as follows.

*to never push from c4 to b5 or e6 to d7 (or to b3/f7)  unless this is the only way to avoid material loss-& to move back to c4/e6 asap
*to avoid tactical errors, especially those involving threats to g2
*to keep the minimal fortress position in mind, and guide the game towards it (or a better position if possible) while avoiding any losing zugzwangs
*exploit the  repetition rule (if necessary) to win the ending that ensues
The minimal fortress position is as follows: Helpers at c4, e2,e6,f1,g4 & h3. With Doc at g2 you can play through to see how Doc can win (unless Owlman is at d3, f3 or f5 and it is Doc to play).
Comments welcome.
Posted by Andrew Perkis at 3:04 PM No comments: 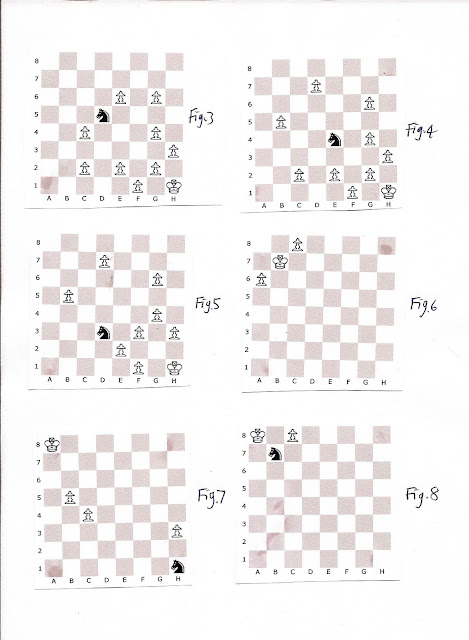 Posted by Andrew Perkis at 10:01 AM No comments: